Is the Worst Over?

The March GDP figures released on Wednesday showed that growth in the first quarter of this year was 0.9% in real terms. Of that, 0.6% came from the rise in export volumes, which increased 5% in the quarter. This was unexpectedly large, and in fact over the year (“year-on-year”), which is a smoother change, the increase was just 8.1%, a rate of growth in exports roughly where it’s been for the last few years.

The Hard Road Ahead

There was a sense of relief that the Federal budget, handed down a week ago, wasn’t anywhere near as punitive as the 2014 budget. However, though it is important, the impact of the budget can be outweighed by other factors. The two biggest negatives over the next couple of years are the fall in mining fixed investment and the weakness in commodity prices.

Recent data from China covering the first quarter of 2015 confirm that Chinese growth is as low as it was during the GFC, when the entire world economy (with the notable exception of Australia) plunged into the deepest recession since the Great Depression in 1930-1933. This time however, world growth, though a little weaker than it has been, is still positive.

Economic indicators in Europe are showing signs of life! 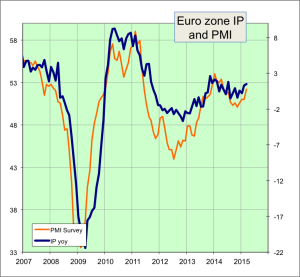 The reason this i such an exciting event is that the European economy has more or less stagnated for 7 years. Real (inflation-adjusted) GDP for the EU as a whole is still below the pre-GFC peak in Q1 2008, after a series of policy blunders by the ECB (European Central Bank) and by the EU and key European governments.

World Growth Starts to Pick Up 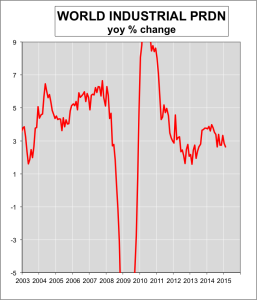 Although you can’t see it in the chart to the left, there are clear signals that world growth is starting to pick up, after the deceleration that took place over the last year.

When Good is Bad

US employment data for February continued the strengthening trend of the last year, despite very cold weather over much of the eastern US and unseasonably warm weather/drought over the rest of the country. This was the highest increase in the three month average in a decade, if you ignore the short-lived spike when the US Federal Government hired a couple of hundred thousand temporary workers to take the ten-year census in 2010. In fact, it was close to the highest in three decades.